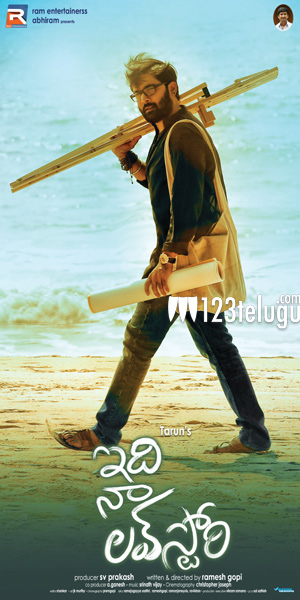 “Idi Naa Love Story” is actually a Kannada remake of the super hit”Simple Agi Ondi Love Story.” The Telugu version is being directed by Ramesh Gopi and produced by S.V. Prakash under Ram Entertainers banner. Actress Oviya has made her debut as a female lead in Telugu with this film. Recently the makers have also released the first look poster which showed Tarun in an ultra stylish look, impressing everyone.

Tarun is considered as the Lover Boy of Tollywood who started his career as a child artist in a myriad of movies. As he grew up, he continued the success rate with all time glorious films such as “Nuvve Kavali,” “Nuvve Nuvve,“”Nuvvu Leka Nenu Lenu,” “Sasirekha Parinayam” and many more.After a long gap, Tarun has decided this is the right time to make a big re-entry.

Young hero Tarun who is maintaining a low profile in the film industry is now back with an interesting romantic entertainer. Apparently, Tarun is hoping that his new film will do well at the box office. Having impressed with the output, he has roped in Nagarjuna Akkineni to launch the teaser of his film titled as Idi Naa Love Story, which is in post-production works On Friday, Nagarjuna unveiled the teaser of the romantic drama, and also wished the team luck. The teaser really looked good and promised some freshness. Tarun is seen in a completely new look for the movie.

Directed by Ramesh Gopi, produced by S.V. Prakash under the banner of Ram Entertainers and the music by AR Rahman’s disciple Srinadh Vijay.

Thank you very much to Ramesh Gopi and S.V. Prakash for giving this opportunity for releasing ‘Idi Naa Love Story’ in Overseas.