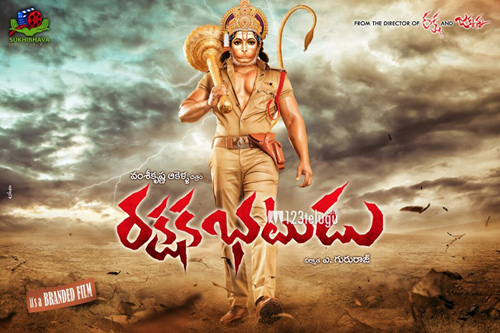 Recently, the makers of Richa Panai and Baahubali Prabhakar-starrer intense action drama, Rakshaka Bhatudu, unveiled the film’s intriguing teaser and a few promotional posters that hid the hero’s face with an Anjaneya mask.

Since then, audiences have been quite curious to know who this mysterious hero was. To step up the buzz surrounding the movie, the makers have decided to not reveal the hero’s name until the film’s release and said that a prominent Telugu hero had played the lead role.

Rakshaka Bhatudu is directed by Vamsi Krishna Akella, the maker of RGV’s Raksha and Sunil’s Jakkanna. A Gururaj is the film’s producer. The movie will be hitting the screens either in the first or second week of April.

Do come up with your guesses on who the mysterious hero of Rakshaka Bhatudu could be from the list of stars given below: