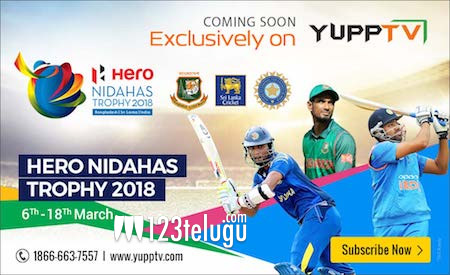 All the matches will be available exclusively live on YuppTV in the USA, Canada, North Africa, Australia, New Zealand, Malaysia, United Kingdom and Europe. Live streaming is also available on YuppTV for free in Saudi Arabia, UAE, and Middle East countries.

The T20 tournament will follow a round robin format with India locking horns against Sri Lanka initially, trailed by India vs Bangladesh and Bangladesh vs Sri Lanka, twice in that order.

Commencing on 6th March, the series comprises of 7 matches including the final on 18th March, with a day’s gap in between consequent matches. The highest point earners will advance to the finals on 18th March 2018.

Nidahas Trophy was Organized by the Sri Lankan Cricket Board celebrating the 70th year of the country’s Independence. Primarily organized in 1998, the tradition is being rejuvenated again after 20 years. India being led by Rohith Sharma, Sri Lanka being led by Dinesh Chandimal, and Bangladesh being led by Mahmadullah, are competing in this series.

The series is organized in R Premadasa Stadium of Colombo and can be live streamed on various devices through YuppTV Website or the App.

YuppTV is one of the largest internet-based TV services providing Indian, Nepali, and Sri Lankan TV Channels from 14 different languages to the viewers all over the world. The service offers TV Shows, Movies, News, and other programs live through the website and a high-performance App.

YuppTV has been serving the Indian expat communities in various countries across the world for the past decade and has garnered quite a reputation for being affordable and delivering extensive content.