After the Amazing Toronto Concert on Sunday,
Maestro Ilaiyaraaja set to arrive in New Jersey 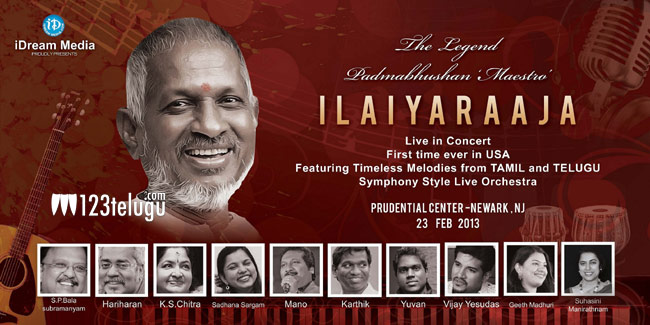 After leaving the over 30,000 (Thirty thousand ) strong crowd at the Rogers Center Stadium in Toronto spell bound with his Music on Sunday 16th Feb , Maestro Ilaiyaraaja is all set to arrive in New Jersey today, 19th Feb – Wednesday.
The Toronto concert was spectacular and the atmosphere was electrifying throughout the concert which went beyond 4 hours.
The excited crowds were cheering the Maestro and relishing every note and every beat the Maestro produced along with his team of extraordinary singers and musicians.
Vasu, CEO of iDream Media, which is organizing the New Jersey concert, travelled to Canada for the concert and said the experience was extraordinarily joyous and overwhelming.
He said we are great fans of Raja Sir ourselves first and being able to organize the Legend’s First ever concert in USA at New Jersey on 23rd Feb, is a dream come true. We feel thoroughly delighted and feel very fortunate to have got this opportunity.
Dr. SP Balasubramaniam, K.S.Chitra and Karthik raja arrived in New Jersey on Monday afternoon. Raaja Sir himself will be arriving on Wednesday and a Press meet is being convened for the American and Indian American Press. Also whats more, in addition to the artists who performed at the Toronto concert, two more wonderful singing talents Mano and Geeta Madhuri will be joining the team on 23rd for the Prudential Center Concert.
Mean while, the ticket sales for Prudential center event at ticketmaster.com and NJTamilSangam.org is happening briskly. It looks like New Jersey will see some fabulous crowds this weekend and it will be a true musical feast to the audiences in the East Coast.
Stay tuned for updates.