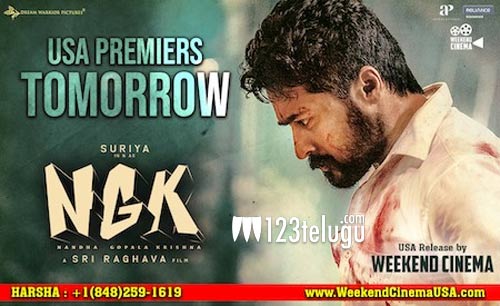 Selvaraghavan is a well-known name in TFI for delivering hit movies like 7/G Brundavan Colony and Aadavari Matalaku Arthale Verule. NGK is his first movie with actor Surya which is slated to release this Friday, 31st May. Film also stars Sai Pallavi and Rakul Preet Singh as the leading ladies.

Actor Surya and team are all confident about the film and excited about its release. Telugu trailer of the film released a couple of weeks back has already crossed 2.6 million views in YouTube. Songs by Yuvan Shankar Raja also received a good response.

Weekend Cinema, a US film distribution company has bought the rights of the film and are planning to release the film in a grand scale with over 150 + screens and premiers on 30th May.

With so much positivity surrounded around the film, fans and moviegoers are eagerly waiting for this high octane political thriller.