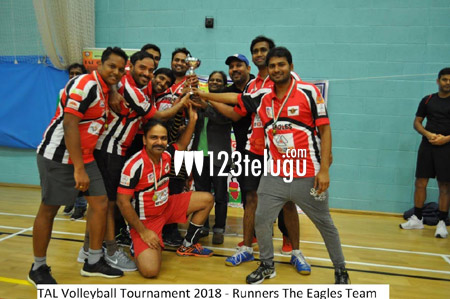 TAL has started another sporting year 2018 with the Volleyball Tournament and many more sporting events such as badminton and the prestigious TAL Premier League to follow, for Telugu people in and around London.

The Eagles team have claimed the runners up position while Cool Cruisers stood as the 2nd runners-up team in the tournament in which more than 40 games have been played in this Championship. The tournament was played by more than 100 Telugu players in 9 teams.

TAL Sports Trustee Murali Thadiparthi has praised all players for their sportsman spirit and commitment towards the sport. He invited all players to continue their support to sport and to the community. He requested everyone to encourage kids to participate in sport and be active and healthy. Murali specially thanked the event coordinators Sunil Nagandla, Rajesh Veeramachaneni and Ravi Sabba and the volunteering team who played a key role in successfully organising the event.