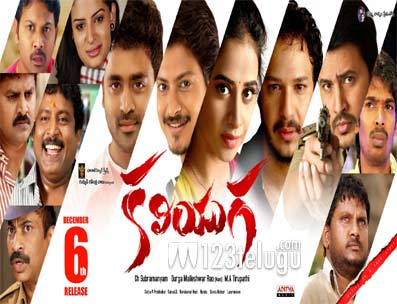 Continuing the trend of low budget films, yet another movie which has hit the screens is Kaliyuga. Let’s see whether it has anything interesting or not.

Venkat(Surya) and Prakash(Sasi Kumar) are two best friends who are inseparable in life. After a point of time, Venkat brutally kills Prakash. As the cops are after Venkat, a new character named Chandu(Vishwa) enters the scenes and reveals to the cops that he is the one who has killed Prakash. Who is this Chandu and what is this confusion all about? To know this, you have to watch the film on a big screen.

Surya who did the role of Venkat is the highlight of the film. His performance in a scene where his sister passes away is just terrific. Also, the manner in which he kills his best friend is also very good. Raj also did a good role in the film and his emotional outburst was very good to see on screen.

Heroine Swathi Dixit was pretty impressive as the female lead. The guy who played the main villain was also awesome in his role. The rest of the cast did well in their roles. The story idea of the film is good and the manner in which the emotions are showcased is also neat.

Even though the story idea is good, the narration takes a severe beating as there is absolutely no flow in the narration. There are no proper connections to the scenes in the film. Upon this, the screenplay of the film is quite slow and dull.

The so-called twists showcased in the film do not engage one bit to the audience. There are so many scenes that look repeated in the film and sidetrack the film many a time. After a while, the emotional angle gets diluted in key areas. The logic goes for a toss in this film and the key content is not at all used properly by the director.

Music by Kamal D is just about okay as an emotional song in the second half is pretty good. The production values of the film are just about okay and so was the camerawork. Editing is pathetic as many scenes could have been chopped off in the second half. Production design and set work are fine. Director Titupathi had a good subject but his narration is a big disappointment.

On the whole, Kaliyuga is a routine revenge drama that does not click one bit. Even though it had a good scope for drama and twists, the director missed out and made the film dull and boring with repeated scenes. Except for some emotional scenes, this film is a letdown and can be left alone this weekend.